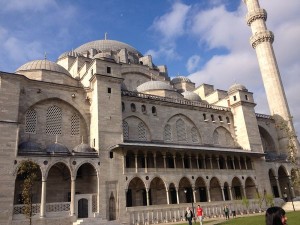 The argest and most imposing mosque in Istanbul, the city of domes and minarets, is the Suleymaniye. The aesthetic supremacy of its interior and exterior and its perfect proportions have been captivating the visitors for centuries. The Suleymaniye Mosque is an architectural masterpiece. . The 16th century was the golden age of the Ottoman Empire. Suleyman is the Magnificent, the longest reigning among the thirty-six Ottoman sultans, ruled for 47 years in this century. The great sultan entrusted the construction of the mosque to bear his name to Sinan, Sinan completed the mosque and the large complex surrounding it between 1550-1557. The mosque was one of many demonstrations of the genius of Sinan, the father of classical Turkish architecture. The complex surrounding the mosque was composed of schools, a library, baths, public kitchens, caravanserai, a hospital and shops. The beauty of the exterior of the mosque is best appreciated from a distance. All the architectural elements of the interior are in perfect harmony with one another. The static balance of the structure is faultless too.